GLEN ROCK VOLUNTEER AMBULANCE CORPS
Archived News 2015
June 20, 2015
Members of the Glen Rock Volunteer Ambulance Corps formed a standby crew at  the GRHS graduation on June 18, 2015.  One of our own EMTs, David Mendelsohn was among the graduates.   Congratulations and best wishes to David as he moves on to college.
On July 3, GRVAC members honored retired member Dave Behar for more than 30 years of service. Read More....
On Monday, June 15, 2015, members of the GRVAC honored Noreen Egan for her 30 plus years of service. Read More....
GRVAC Celebrates New Ambulance (Oct. 24, 2015) 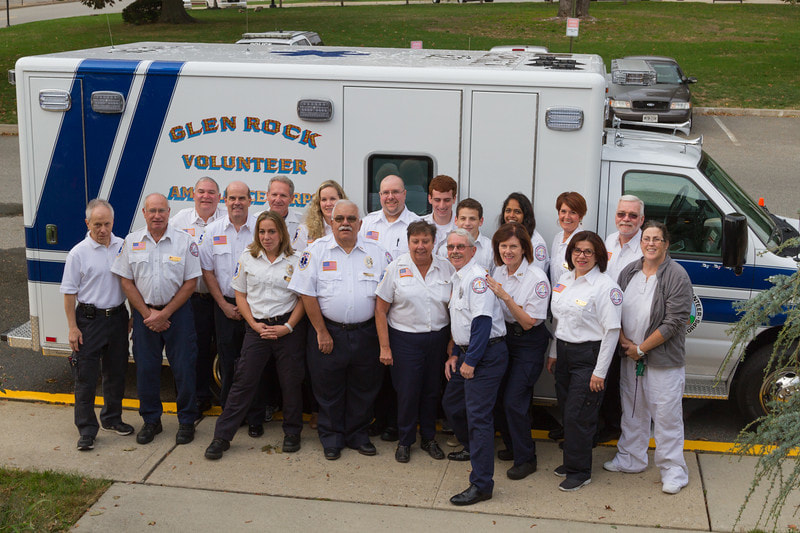 On Saturday afternoon, October 24, at 4:30 pm, the Glen Rock Volunteer Ambulance Corps celebrated its newest ambulance 821 with a traditional "wetdown" ceremony. The new amnulance actually went into service a month ago.

"Our new ambulance is the culmination of 15 years of savings in our ambulance replacement fund", said GRVAC President Diane Herrlett. "We appreciate the support of the Mayor and Council as well as the generosity of residents of Glen Rock."

After brief remarks by President Diance Herrlett, Mayor John van Keuran, Chief Ed Esposito and Rig Chairperson Ron Jemal, Chaplain Tom Blind offered a blessing, which was then followed by the "wetdown" by the Glen Rock Fire Department. Members of the Borough Council, Glen Rock Police and Fire departments were also in attendance.

The new ambulance replaced a 16-year-old vehicle that reached the end of its service life.

"In addition to state of-the-art technology in the ambulance, 821 and its five year-old companion Ambulcane 820 are both equipped with the new Stryker Power-LAD hydraulic system, which lifts patients weighing ip to 700 pounds with the touch of a button," said Esposito. "The System lifts and lowers the cot into and out of the ambulance, helping to ensure patient safety and reducing the risk of spinal injuries for GRVAC members."