The Glen Rock Volunteer Ambulance Corps (GRVAC) was chartered September 16, 1951 by a group of concerned citizens to provide emergency first aid and transportation for their neighbors.  A door-to-door fund drive raised the $10,000 needed to purchase an ambulance, which was housed in the garage of Charles White, the first GRVAC captain.  This garage is now the offices of Kilroys Wondermarket.  Charter members included Harvey and Janet Hatch, Frank Balou, Frank Kuna, Bob Brunswick, John Krantz, Don Knapp, Harold Pabst, and Bill Hashagen.  The GRVAC was on call five days a week.  Until the advent of a paging system in the late 1960s, members left their phone numbers at the police desk, which contacted them by telephone whenever an ambulance was needed.

By 1953, the Corps was responding to 150 calls per year and membership grew accordingly, requiring that a headquarters and garage be built. With groundbreaking on December 22, 1953, Phil Gulmy, Sr. poured concrete and Charley White's trucks transported bricks from Sayreville.  The new headquarters building was dedicated in 1955.

With the need to replace an aging ambulance, the GRVAC conducted a fund drive in 1961 to purchase a Sayers & Scovill (S&S) ambulance built on a Cadillac chassis.  Dedicated on September 10, 1961, GRVAC President William Hashagen presented the keys to Captain Jack Murphy.  Another S&S ambulance was acquired a few years later and dedicated on May 30, 1968, with President Robert Chapman presenting the keys to Captain Emil Vanderspiegel.

Soon after, a new law required all members to be certified as Emergency Medical Technicians (EMT).  Although this training vastly improved the level of care that members offered their neighbors, it required equipment that would not fit into the S&S Cadillac ambulances.

In the early 1980s, the GRVAC began a first responder system, in which a member of the duty crew would respond directly to the scene to render emergency care and alert the responding crew as to the situation.  Members used their personal cars for this purpose.  Shortly thereafter, the Glen Rock Department of Public Works donated an old station wagon to the GRVAC, which became the first responder vehicle, known as 829.  In 1984, this station wagon was replaced by a Dodge station wagon.

By 1983, with the introduction of the paramedic system in Bergen County, larger, modular-type ambulances were needed, which would not fit into the existing garage.  A successful corporate fund drive and assistance from the Borough enabled the GRVAC to build a larger garage.  After groundbreaking ceremonies on  July 5, 1984, Phil Gulmy, Jr., and Bill Tode carried on the tradition of donating construction equipment.  The membership assisted in the construction of the new garage and converting the original garage into a ready/drill room.

With a donation from the Nettie Beck Foundation in 1994, the GRVAC replaced its First Responder (829) with a Chevy Blazer with four-wheel drive, which improved response capability during severe weather situations.  Two years later, the GRVAC replaced the 1984 Horton ambulance with a 1996 Braun modular-type ambulance (820).  Dedicated on August 28, 1996, President Victor (Rusty) Dagenais presented the keys to Captain Griff Jones, Jr.

In 1999, the GRVAC replaced the 1988 Collins ambulance with a Braun modular-type ambulance (821), which was dedicated on June 15, 1999 with President Diane Herrlett presenting the keys to Captain Ed Esposito.

Following the tragic events of September 11, 2001, disaster preparedness became a priority for emergency response teams.  The federal government also required additional care for fire fighters at a structural fire.  Through a grant and residents' contributions, the GRVAC acquired a trailer to store and transport mass casualty and fire standby equipment.

The GRVAC undertook a new construction project to build a garage addition to store the trailer.  Once again, Phil Gulmy, Jr. donated construction equipment.  The addition and the emergency trailer were dedicated on September 21, 2007, with President Mary Jane Surrago and Chief John DeLaat officiating at the ceremony.

In addition to the state-of-the-art technology in ambulance 821, the GRVAC also upgraded its five year-old companion, Ambulance 820, so both were equipped with the stretcher, Stryker Power-LAD hydraulic system, which lifts patients weighing up to 700 pounds with the touch of a button. The System lifts and lowers the cot into and out of the ambulance, helping to ensure patient safety and reducing the risk of spinal injuries for GRVAC members. Ambulance 820's control panels were upgraded to match those of 821.

Although there have been many changes in vehicles and training through more than six decades of service to the community, the GRVAC remains committed to its mission and looks forward to many more years of "Neighbor Helping Neighbor."
Here Is a Group Shot From 1952 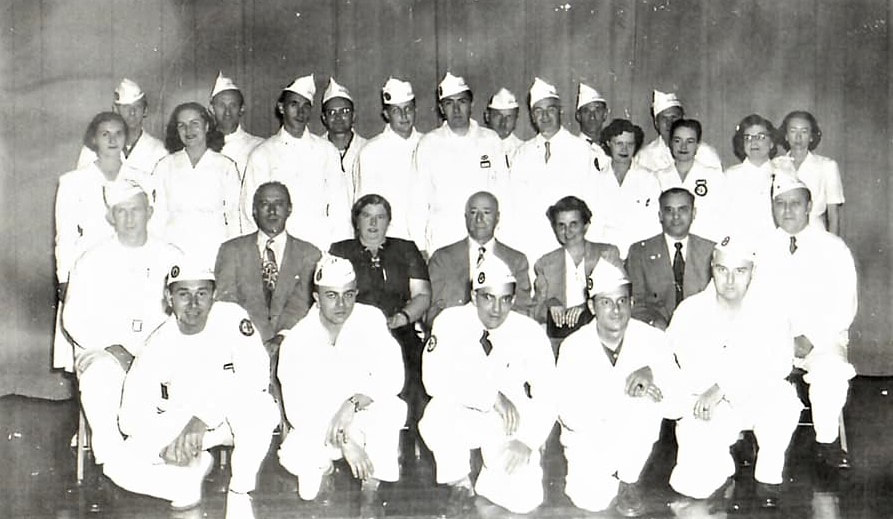 You can join your neighbors and friends that are already a part of the GRVAC. We are lawyers, engineers, masons, nurses, judges, teachers, secretaries, salespeople, retailers, students, moms, dads, students, grandchildren, and grandparents that care about helping others. Contact us today to learn how you can fit into our family. "Feel the rewards of helping others"